When SaaS companies grow, they want to grow fast.

But for every dollar you raise from investors, for every new developer you hire, and for every new beanbag chair you add to your fancy office loft—your marketing team gets put under just a little bit more pressure. Because when you start to scale up, everyone looks to the marketers on your team to deliver more leads, more demo requests, more trial starts, more paying customers, more, more, more.

That’s why it’s important for SaaS marketers to be able to build and test campaigns quickly to see what actually works. It’s a strategy that’s helped Thinkific, the #1 software to create and sell your own online courses, grow from a scrappy startup to an industry leader in just a few years.

Here’s what Andrea Merson, Senior Director of Marketing and Creative at Thinkific, remembers about when they were just starting to scale up.

I was with the company when there were just six of us. We had no design team for marketing and really limited resources. Back then, we were just trying to iterate quickly to see what worked.

Since then, Thinkific has grown into a company of over 100 employees and 40,000 customers. And Andrea says they’re still ramping up to become even bigger—over the next year, Thinkific is on track to double in size.

To drive all this growth, their team is running some seriously impressive marketing campaigns. Here are just a few of the ways Thinkific has been able to generate leads and expand the top of their funnel using Unbounce…

Wanna see how they did it? You can hear from Andrea herself in the video below, or keep reading to see some of the real campaign examples that helped Thinkific grow like a dream SaaS business.

The Challenge: How Do You Scale Your SaaS Company and Grow Faster?

No matter what type of SaaS company you work for—startup or scale-up—the best way to keep growing your business is to move fast and try new things. Andrea Merson can tell you from firsthand experience that having an agile marketing team is absolutely crucial if you’re in the process of scaling up.

I think the hardest thing about being a SaaS marketer is that the landscape is always changing. And at every scale of growth, you’re dealing with different challenges … you always have to be quick enough to be able to respond to what those changes are.

Right now, Andrea says the main challenges at Thinkific are centered around launching new products successfully, breaking into new industries, and continuing to grow the company.

But when you grow as an organization, you’re also taking on a million more tasks and a million more projects. Right now we’re on a trajectory to double in growth. And that really for us means getting out to a larger audience.

Currently, Andrea says they’re averaging one new hire every week—so they have to be running a TON of campaigns to keep the top of the marketing funnel full. (Like, pretty much all the time.) And that’s exactly where a tool like Unbounce comes in handy.

Over the last two years, Andrea and the team have created over 700 landing pages. Here are some of the different ways they’ve been able to use Unbounce to generate more leads and fill their funnel faster.

A landing page example created by Thinkific for their “back to school” promo. Click to see the whole thing.

For the last two years, the team at Thinkific has run a “back to school” promotional campaign with the goal of driving more signups in early September. The campaign promotes a bonus package of exclusive resources and tools that new course creators (i.e., prospects) can use if they sign up for a Thinkific Pro plan.

We built a dedicated landing page specifically for the back to school campaign. For this one, we went after a niche segment of our audience who we knew was just getting started. They already knew about online courses, but really needed some extra training.

But while this landing page looks mighty impressive, Andrea says it actually didn’t eat up as much of their marketing resources as you might think. The project manager who ran the campaign (with the help of one in-house designer) had only been with the company for a few weeks.

She had no coding experience and no design experience. But—within the first couple of hours—she was able to really quickly jump into Unbounce and understand how to use the drag-and-drop builder to get the campaign up and running.

To drive traffic to their landing page, Thinkific used a combination of email, PPC ads, and an Unbounce sticky bar on their website. They targeted an audience of people who were interested in becoming course creators—but needed some help to hit the ground running. The copy on the page did a great job of getting inside their heads and speaking their language. One of the PPC ads Thinkific used to drive traffic to their landing page.

We were able to craft messaging on that page that spoke directly to that audience. And we used the Unbounce page to be able to really outline exactly what is going to be in that offer and allow people to see the value.

Having run the “back to school” campaign for two years in a row now, the team at Thinkific was able to iterate and optimize their landing page this year to see even better results. Andrea says they were able to drive twice as many signups for Thinkific Pro by building on what they learned from last year’s campaign. 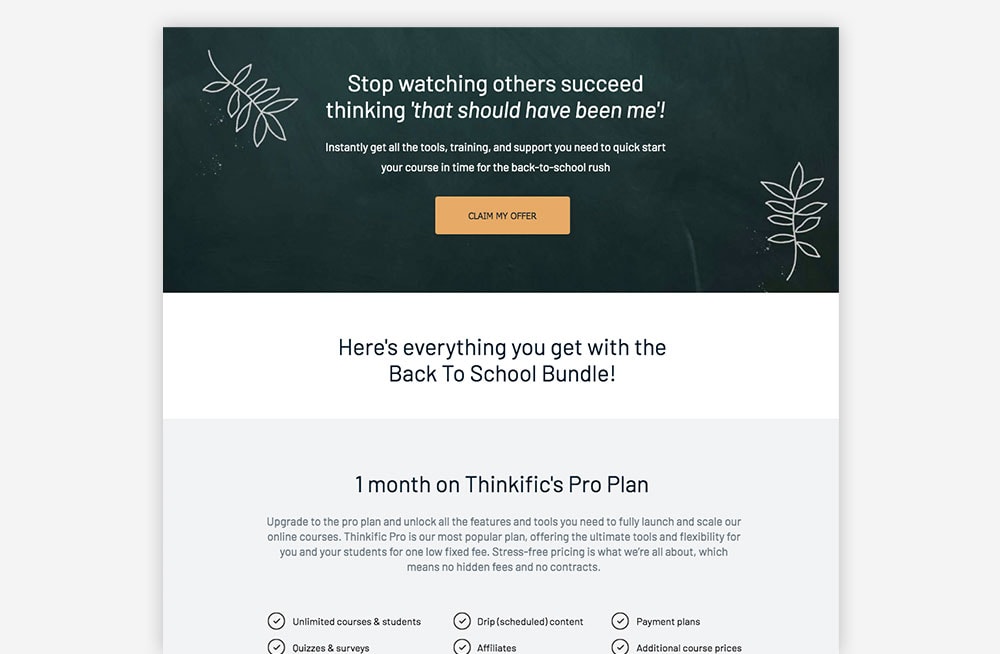 A clear outline of the offer (and a sprinkling of FOMO) helped make this promo successful.

We doubled our conversion rates over last year and we doubled our traffic. At the end of the day, we had 600 people claim the offer through Unbounce. And that’s because we did a lot more work outlining our offer and really diving into the value.

2. The Think in Color Online Summit 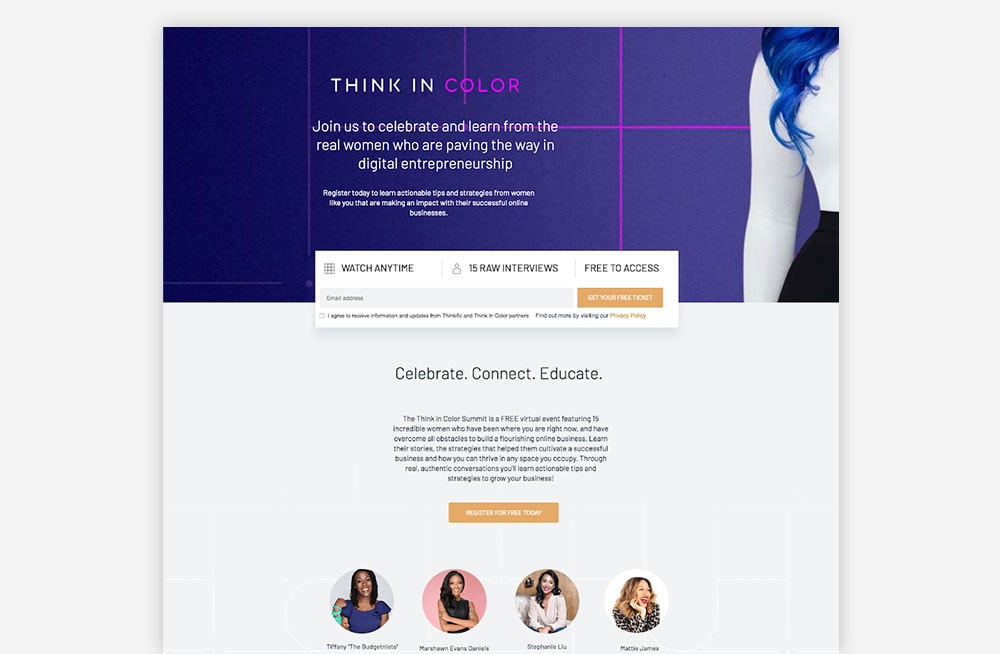 An example of a registration page for a Thinkific online summit called “Think in Color.” Click to see the whole thing.

Thinkific also uses Unbounce landing pages to regularly host free webinars and virtual summits. Andrea says this has been a key strategy for them to not only capture more leads—but also grow their online community.

Recently, their team produced an online summit called “Think in Color” that was particularly successful.

We designed Think in Color to help underrepresented women, especially women of colour, get the training and community they need to thrive in digital entrepreneurship and online courses.

The Think in Color summit helped Thinkific reach and support a new audience—one that has been traditionally underserved online. It featured over 15 raw interviews with a diverse group of women entrepreneurs, rolled out over a four-day period.

And while putting together even a single webinar can sometimes feel like a Herculean task, Andrea says Unbounce helped make the execution easy. They used landing pages for every part of the summit—from the registration page, to the sign-up form, to the actual page that hosted each interview.

Thinkific uses the Unbounce integration with ActiveCampaign to seamlessly connect their landing pages to their CRM. So every time someone signs up for a webinar, they automatically get tagged as a lead and moved into their funnel. We created a separate landing page where users could register for the summit. Once people signed in, we had a form pop up where we could collect more info … Where are you from? Who is your audience? That way, as we continued the summit, we could send attendees content curated specifically to their needs.

The summit was a smashing success, with over 10,000 people registering to attend. And Andrea says they have been able to continue to market to these leads after the fact through email, as well as a dedicated Facebook community they set up for the event (which currently measures in at over 1,700 members). Thinkific set up a Facebook group to keep the conversation alive (and the leads engaged) after the summit was over.

Beyond campaigns, Thinkific also uses landing pages to test new products, pages, and ideas before officially launching them on their website. Andrea explains that they’ve started to do this because they can move faster in Unbounce than they can in WordPress.

We use Unbounce and the WordPress plugin to test our ideas and iterate on designs without ever touching our front-end design and development resources. That way, we can test and validate ideas before we bring in costly resources to hard code our website. Using the simple Unbounce integration with WordPress, the team at Thinkific can build, publish, and test new pages that look just like the rest of their website—without having to get up to their elbows in code.

The integration from Unbounce to WordPress is super seamless. The URL looks the same to our audience, but it gives us the power of the back end of Unbounce too. We can measure how things are doing, get a new page up really quickly—and our audience knows no difference.

If you’re looking for a recipe to grow your SaaS faster, Andrea says that landing pages are a key ingredient. In the last two years alone, Thinkific has been able to drive over 150,000 conversions via Unbounce—those being leads captured via forms, signups for free plans, or subscriptions to paid plans.

And thanks to Unbounce, Andrea says they were able to deliver these results (across 700 separate landing pages) without breaking a sweat.

Unbounce is so easy and fast. The fact that it allows anyone on my team within hours to jump in and get started is truly incredible. And sometimes the best thing is you don’t have to think twice about it.

Since the very beginning, Thinkific has used Unbounce to build high-converting landing pages and bring in new customers. It’s been a key tool for them to scale up their SaaS and become industry leaders—and Andrea says she can’t wait to see what they do with it next.

I would absolutely recommend Unbounce for any other SaaS company, small or big. I’ve been on both sides of the spectrum. Anyone can jump on and be able to use a drag-and-drop builder, understand how to build a landing page and get it up there and iterate.